NewsPaperA Gateway to the Coding Job | Blog
No menu items!
More
Home Career Development What programming language(s) should I learn? 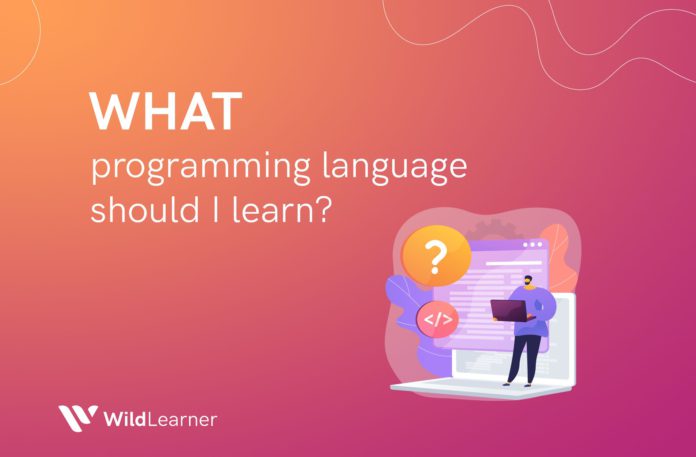 The question you should answer first is: what is the purpose of learning a programming language?

You might want to upgrade your coding skills to complete specific projects within your business objectives. Or you might desire to acquire up-to-date skills for succeeding in the current job market. Maybe, the reason is entirely different.

Anyway, this article reads the main aspects that should be considered when choosing a programming language to master in. Read on; you will also have a source where you can learn your preferred language.

A programming language is what allows you to communicate with machines or computers to transfer your instructions. You might want to create a mobile application or develop an eCommerce site, and it’s essential to know what languages are usually used for each type of coding product.

The primary classification of programming languages

The primary difference between those two languages is the extent to which they are close to machine instructions. High-level languages are free of such limits. Their coding part is more like human language than that of the machine, though it is written so that computers can understand it.

On the contrary, the low-level programming language is very close to machine instructions. It’s written in a style very close to that of machines and requires deep knowledge of machine languages.

The difference between declarative and imperative paradigms can be described as a difference between the general instructed and step-by-step instructed processes. Declarative programming belongs to high-level programming, and it does not include detailed instructions on how the software should perform a specific action. Instead, it provides the outcome and relies on the underlying components of the language to perform the required action.

So, which programming language should I choose to learn?

However, top languages stand behind most programs you use every day, which you will require when applying for a job. So, here is the list of popular languages you should focus your attention on.

C++ is the improved version of C. That’s why you will most probably meet them together or tightly related when choosing specific courses. Many programmers skip learning C and directly start from C++. However, having a solid foundation of C language will help you learn not only C++ faster but also generally understand the system of working of many computers.

C/C++ is used for various purposes. Usually, they are of high value when building applications that will support a high level of interaction, for example, commercial products. For better insight, Adobe runs on those programs.

Python is a leading programming language that the majority of the sources refer to as the first language any developer should learn. Firstly, it’s very popular. The fact that Youtube, Instagram, Spotify, and many other popular programs we use daily are written by Python speaks for itself.

Furthermore, Python is very human-friendly. You can read through the Python code and understand most of the commands, as there are many English words used in the instructions and technical coding parts.

Python is gaining more and more popularity as a tool for data science and machine learning. You can perform massive statistical analysis and business predictions using Python. In parallel, Python is also a popular tool for developing web applications.

Java is not as friendly a language as Python. Still, it belongs to high-level programming languages, and as such, is easier to learn and work with compared to many other purely technical coding languages.

Java is often referred to as a universal and stable language. That’s why many large enterprises, including IBM, consider the knowledge of Java as a competitive advantage when hiring candidates. Java is used to create mobile applications, both for iOS and Android and backends of websites. However, it’s primarily designed for building applications that work for Android systems.

JavaScript is one of the most popular programming languages that allow the creation of super engaging and interactive interfaces for websites and web applications. It’s a competitive advantage because developers can add elements like animation to the platforms they create via JavaScript.

The added functionality of JavaScript makes it the top language for frontend and very competitive for those companies who want to stand out with the friendliness of their websites and increased user engagement rates.

Kotlin’s best advantage for many developers and businesses is that it has effortless interoperation with Java, which means that programs written by Java can easily be rewritten in Kotlin. That’s a catchy point for many companies, including Pinterest, Coursera, and others who moved from Java to Kotlin.

Generally, in professional communities, Kotlin is known as the improved version of Java. It supports similar logic and can be used for similar purposes. However, Kotlin was designed to address issues that Java had as gaps. And many agree that Kotlin succeeded in that mission.

Kotlin can be used for mobile applications (mostly for Android), web applications, and desktop and server-side development.

Advise me where I can start learning my preferred coding language?

If you want to start learning a programming language right now, head to the major source of specially designed courses. Wildlearner is a platform that combines detailed, easy-to-grasp, and interactive courses for different programming languages. For example, the new course of Python or an interactive world of JavaScript is literally one click away from you. Yet, you can explore the detailed, informative material, which will help you code and learn on practice, developing a ready set of skills compatible for your future business projects and the job market.