NewsPaperA Gateway to the Coding Job | Blog
No menu items!
More
Home Career Development The best way to learn Python and what can you do with... 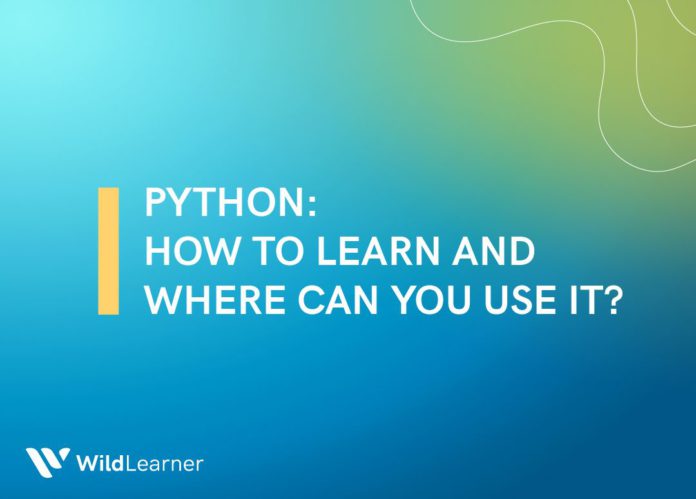 It would take you some 34 lessons to learn A-Z Python with WildLearner. We have designed this interactive course for you, considering the popularity of this high-level programming language in the job market.

Python is a human-friendly, object-oriented and expressive language. It’s required from programmers in many companies due to the coding simplicity and excessive features. Python supports different products, including AI, operating systems, mobile applications, video games, etc.

How can you quickly learn Python, and what can you further do with it?

Let’s figure it out together.

How much time do you need to learn Python?

Let us ask you a reverse question: how deeply do you want to learn it?

Python has many features, and its required learning time largely depends on what portion of those features you want to acquire. In this regard, that’s a good idea to determine your goal of learning Python in advance. If you can succeed by exploring its basic functionalities, there is no need to understand all of its advanced features thoroughly.

For example, it can take you as little as a few weeks to master Python’s basic syntax and its pandas techniques. This base would be enough for you to analyze your business databases, such as Google Analytics. If you do not want to stop there and would like to become a full-scale Python specialist and use it for advanced projects such as data science or machine learning, you can spend up to several months.

It’s essential to find Python courses that will fit into your personal learning rhythm. In this regard, it’s better to use ready online courses, which you can open and close anytime, rather than attending classes organized by professionals, where you will have little room for organizing your flexible studying schedule.

That’s why WildLearner recently introduced the 34 recorded lessons of Python. This gives you wide flexibility to learn in the speed or style that is most appropriate to you. You can replay the same lesson for a week or go through some 5-6 classes over the night.

Why is Python so popular?

Python has had its success story since the beginning. In the 1980s, when the language was developed and introduced to programmers, it could operate in different domains. That universality was one of the first reasons why the tech industry warmly welcomed Python.

Besides, Python has simple syntax and versatility. It can be used for writing projects of any scale. Adding that its coding part is very human friendly, Python is one of the quickly learned, meantime powerful programming languages.

What can you do with Python?

As the best answer to this question, let’s list the tech giants made with Python. Youtube, Gmail, Dropbox, Google and many other platforms we use everyday were written on Python.

Therefore, there is a large scale of coding products you can build with Python, and below sections introduce you those options in more detail.

Python is an exceptional choice for getting deep insights into the vast pool of data and helping you to make data-driven educated business choices. That’s why, though Python has many other use cases, it’s prevalent among data scientists.

The calculations of 2020 by indeed hiring lab showed that the demand for Python in data science increased by 128% over the previous five years. Python’s capacity fully covers activities from basic data analysis and visualization to developing advanced machine learning algorithms.

In many organizations, data processing workloads exclusively run on Python. In addition, AI and Machine Learning professions, for which the deep knowledge of Python is essential, continue growing. By the estimated projections, ML jobs will increase to $ 3,1 billion by 2023.

Python and Artificial Intelligence are another perfect pair. While some think AI is true magic, Python’s code and algorithms largely support the creation of AI products. The most popular library which allows creating complex models from classifiers to regression is Scikit-Learn (Sklearn). It can assist you in building world-class tools which can generate intelligent behavior.

Python includes numerous web development frameworks; that’s why the companies like Spotify, Mozilla, and Reddit preferred Python while developing their sites. If your primary goal is to utilize Python for creating websites, focus on its Flask, Pyramid, and other frameworks, which can grant you functions like content management, data authorization, and other key ones for website development.

Python is compatible with all operating systems, allowing developers to create products both for Windows and Mac computers. One of Python’s main characteristics is that it’s very object-oriented. That’s why you can easily code the system, which will be designed to operate many tasks from one place later.

Python for Desktop and Mobile Applications

You should refer to Python Standard Library if you wish to develop GUI desktop applications, as the library has all the necessary toolbox for that. In addition, it’s also possible to build desktop applications from scratch. In the case of mobile applications, Python can create apps working both on iOS and Android. To have a better insight, Instagram was written in Python.

The finance industry primarily benefits from the Python libraries designed for information compiling and procession. Also, Python is a powerful tool for qualitative and quantitative analysis, which is a good base for making correct predictions. That’s why investing your Python skills in the Finance’s departments operations can be a valuable commitment.

Games are not one of the most popular products you can develop with Python, but you can still write some text-based games on it.

Look how Python defines its main applications on its official page.

The latest version of Python is 3. So, if you are just about to dig into the programming language, there is no doubt you should master the 3rd version. There can be cases when the hiring company can still work with Python 2, but the chances that they will soon switch to a newer version with simpler syntax are very high.

Python itself as a company gradually denounces Python 2, emphasizing the benefits of the new version: improved readability, functionality, and popularity.

8 Reasons Vue Is Used For: Why Is Vue Growing So Popular?

How to Overcome React Challenges: Learn React in 1 Day with WildLearner

What Is Python and What It Has to Offer?