NewsPaperA Gateway to the Coding Job | Blog
No menu items!
More
Home Career Development What is C++ used for? 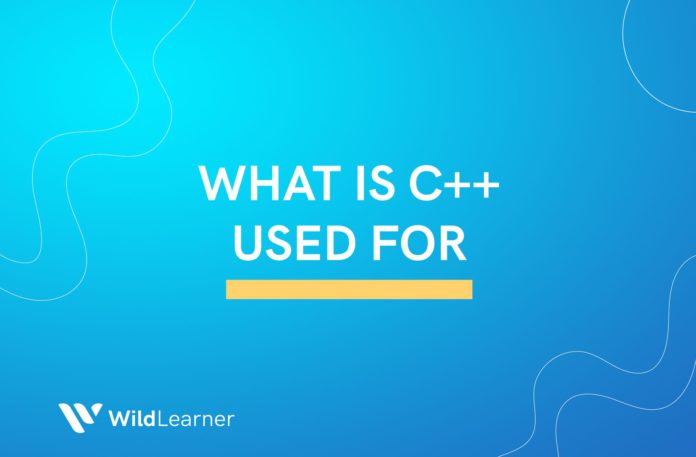 If you do not have skills in C++, but want to conduct projects for which it is required, there are so-called “synonym languages for C++” which can enable you with the same functionality.

So, the below article reads what is C++, what is C++ used for, and which other languages you can use instead of it.

How did it all start?

C++ was created by Bjarne Stroustrup, who is a Technical Fellow and Managing Director at Morgan Stanley in New York City, and a visiting professor at Columbia University. If you want to get a first-hand insight into how this language emerged, and what are its perspectives for the future, read an interview with its creator.

Why has it become so popular?

The popularity of C++ is mainly connected with the fact that it grants programmers excessive opportunities to conduct almost any type of project. It’s a general-purpose programming language, and it can effectively run on almost all environments. Basically, you can freely run the program on Windows, Linux, Mac, Unix, and other platforms.

As C++ has the functionality to manipulate the machine that it runs on, it’s possible to fine-tune the code even for hardware with limited space or power.

The main advantages of C++ are described below:

Because of its universal nature, it’s considered that once you learn C++ and thoroughly understand it, you can switch to almost any other coding language. Meanwhile, C++ is considered one of the hardest languages to learn because of its syntax.

We stated C++ is universal and can be used for various products. Below, you will read not all, but one of the most popular applications.

One of the most popular uses of C++ is operating systems. Its low-level capabilities and a large collection of C++’s system-level functions allow making every detail of the operating system fast and energy-efficient. C++ stands behind the operating systems of Microsoft, such as Microsoft Windows 95,98,2000, XP, and many others. Besides, Apple’s macOS and iOS are also coded in C++.

Games development is another essential direction of C++. Game developers mostly give their preference to C++ as it can bear the complexity of 3D games, optimize game functionality and user experience, utilize intensive CPU functions, and many more. C++ has been a popular choice among game developers for a rather long time. For your better insight, Counter-Strike, StarCraft, Xbox, PlayStation, and Nintendo Switch were created in C++.

C++ is the coding language that was used to create world-famous databases like MySQL (assists users in saving time, money, and other resources) and Bloomberg RDBMS (provides real-time financial updates for investors). In addition, C++ was used to create MongoDB, based on which there were created many famous applications. The above examples aim to showcase the variety of functions that C++ can build for database software.

There are high chances the browser which you are using right now for reading this article was developed with C++, as it supported Google Chrome, Mozilla, Safari, and Opera. C++ is the reason why we can see the web content loading fast on our devices. C++ developers make powerful back-end services that quickly retrieve information from databases and render code into the web pages.

C++ can also be a good choice for you if you deal with augmented and virtual reality applications. It supports essential processes, which later create well-detailed virtual experiences in AR/VR applications. Basically, due to C++, those applications can handle large volumes of data and adjust it based on input from user interactions. Many of the applications of Unreal Engine are created with C++.

Creating multithreading and concurrency is one of the advantages of C++ which makes it a highly preferable language for many libraries. It is especially popular for applications that require low-level manipulations and hardware programming. This is because C++ is supported by the Standard Template Library, and it has four key components, including algorithms, containers, functions, and iterators.

From the fact that C++ is applicable for developing games, one can conclude that it can also help develop 3D animation, simulation, rendering, and modeling. Many projects such as image processing, mobile sensor applications, and similar can be coded with C++. You can also use the language if you want to create animated environments, motion graphics, and characters for VR.

What are some substitute programming languages I can learn instead of C++?

Generally, many programming languages have similar functionalities, and in the majority of cases, you can conduct the same project using different languages.

However, through trial and error, the community of programmers established some 10-15 popular programming languages, which are more accepted than others.

Similarly, it’s widely accepted that C++ can often be replaced with the programming languages C and JavaScript, as in many cases they have the same power for websites and web applications.

Therefore, if for some reason, you do not want to study specifically C++, you can learn the following languages:

8 Reasons Vue Is Used For: Why Is Vue Growing So Popular?

How to Overcome React Challenges: Learn React in 1 Day with WildLearner

What Is Python and What It Has to Offer?