NewsPaperA Gateway to the Coding Job | Blog
No menu items!
More
Home Career Development Should You Become a Front-end or Back-end Developer? 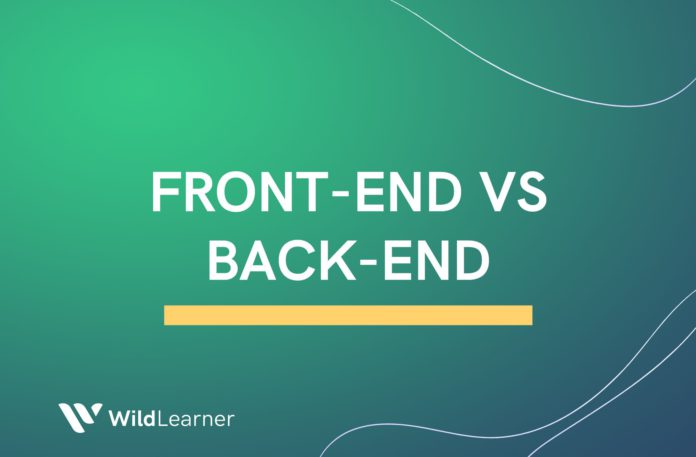 The profession of a programmer is broadly divided into:

You can easily understand the main difference between those two from their titles.

Front-end development refers to everything in the front line of the website, everything that users can see and interact with.

Right now, the way you see this article on your screen, the font size and color, layout, buttons, etc., is the result of the front-end developer’s work.

On the contrary, the back end is what is hidden behind the visible part of the website. It includes the coding part, the server, and all other elements that make the website function.

If you head to the section of our courses and buy one, the back end will allow this transaction to happen. As an ordinary user, you can’t interact with the back end of the website.

However, this brief description is hardly enough for you to understand the front-end vs. back-end comparison in depth.

Read on for more details.

What is a front end?

Front-end is often called the “client-side” of a website or application, as it’s the interface that a user sees and interacts with. Everything you can see on your screen’s device, such as colors, font size, font color, design of buttons, sections, etc., is included in the front-end development.

Though at first sight, you might think front-end developers primarily account for the website’s visual appeal, that’s true only partially.

The topmost priority of the front-end development is to ensure that the website is responsive and intuitive.

A website, web app, or mobile app should be easy to navigate and have a convenient user experience. Only after ensuring convenience and logical arrangements of all the elements, front end developers focus on the design and style.

What is the back-end?

The back-end is usually referred to as the server-side of the site, as it’s related to the part which technically supports the operations of the website but is not visible to users. The flow of user activities for every website works in the following way:

So, we can state that the front-end development works to package the processes happening in the website’s back-end in a convenient and user-friendly way. The website’s front end works well only if everything is properly arranged at the back-end.

Front-end vs. back-end: which one should you choose?

Both front and back ends are essential for websites and applications and are in high demand in the job market. So, which one to choose entirely depends on your preference, and here are the main aspects you should consider when making your choice.

You will need to learn different programming languages

The classical trio for the front-end development includes HTML, CSS, and JavaScript. HTML (HyperText Markup Language) is used to develop the website’s core and fundamental functionality. CSS (Cascading Style Sheets) is used to add design and style to the website. JavaScript is the final touch for the website, which adds interactive elements and dynamic content, such as 3D buttons, animations, etc.

The options of coding languages for the back-end development mainly include PHP, C++, Java, Python, and Node.js. PHP is one of the most popular server-side languages used for web development. C++, on the contrary, has a wider scope of operations. It is not specifically designed for web development, but it’s often used in website back-ends. Java and Python have several applications, one of which is back-end development. Both languages are highly scalable and help programmers effectively integrate different systems. Lastly, Node.js is not a framework or coding language, but it’s often used to build back-end services like API.

So, one of the first things we recommend you to pay attention to is which programming language is easier for you to learn.

Our other blog posts to help you in that

TypeScript vs JavaScript: What is the main difference?

The best way to learn Python and what can you do with it?

You can also check our interactive video courses to learn your preferred language.

You will earn more as a back-end developer

There is no specific interval between the salaries of back-end and front-end developers, as it largely depends on the industry or an organization you will work for. Besides, different statistical sources mention different annual salaries.

However, the general pattern is that back-end developers earn more, even if that more equals 1-2% higher than front-end developers.

Front-end developers continuously explore user behavior and update the UX of their websites according to it. They deal with the more creative part of website development, such as working on design and overall style. Besides, with every update in the company, front-end developers are required to update the website.

On the contrary, the job of back-end developers is more technical. They usually deal with only a coding part and are responsible for fixing bugs that arise during the website’s operation. However, back-end development also requires a portion of creativity when technically organizing complicated functions for the website.

You see, back-end and front-end development are almost in the same niche. Doing both will make you a highly demanded specialist, with a salary enough to cover your essential and non-essential costs. So, we recommend you mainly focus your attention on the type of job you want to do.

If you’re a creative person, who loves changes and a dynamic work routine, front-end development is a better choice for you. Choose the back-end if you are more into tech and do not want to deal much with design and UX.

Anyway, it’s good for front-end developers to have at least a basic understanding of the back end. In this way, you can better organize the overall website development process and create a better tandem with back-end developers.