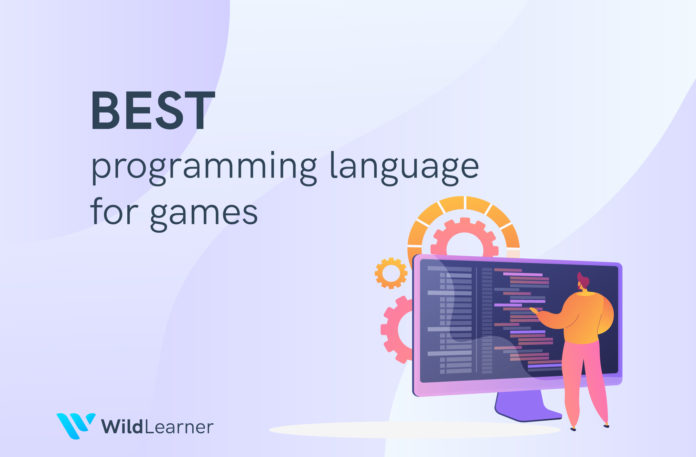 Were you admired by all the functionalities of your favorite video games in your childhood? It’s time to create something similar yourself.

If you have made your way to this article, you are interested in game development, which is great news, as the development of video games is a prospering industry.

Another research tells us that the demand for video game developers between 2016 and 2026 will be 9,3%.

So, if you manage to acquire the right game development skills now, you will secure yourself with job opportunities and a high income for the future. Game development itself is one of the most challenging types of programming, and a good professional can rake in.

What is video game development?

In short, video game developers create a software where each line of code creates an atmosphere, action, and characters. The best programming language for games would allow you to precisely develop all the game’s settings and mechanics.

What is the best programming language for games?

There are many game development languages, and which one you should learn depends on which type of game you want to develop with it.

Will it be a console, computer, or mobile game?

This is an essential question to answer before choosing a language to invest in. However, as many languages are compatible, you can choose to start learning any of the below programming languages.

We have picked up the eight best languages for game development used by pro developers.

Java is primarily considered the best language for game development, as it allows developers to create games for any system. This is because the code of Java runs on the JVM or Java Virtual Machine, which translates the code into bytecodes freely executable for any platform. Another advantage of Java is that it’s user-friendly and easy to learn for newbie programmers.

Games that were created with Java: Minecraft, Ferrari GT3

JavaScript is the best language for creating interactive elements on the screen, such as animations and any other moving things. Therefore, it’s no surprise that it’s listed as one of the top interactive online game development options. It’s ideal for developing cross-platform mobile games because JavaScript’s code allows easy integration with the most popular web technologies HTML and CSS.

Games that were created with JavaScript: Angrybirds, Little Alchemy

Should you learn Java or JavaScript? Read in our comparison guide.

C++ has a critical competitive advantage for game development – great memory management. This, in turn, is a necessary feature for developing high-definition video games. Like JavaScript, C++ is a universal language, as games created with it run on most game engines. The main types of games developed by using C++ are big console and Windows games.

Games that were created with C++: Counter-Strike, Master of Orion III

Though Python is mainly used for data science and data analytics, its features also allow developers to construct games. Thanks to Python’s Pygame framework, game developers can create game prototypes faster. In addition to other benefits, Python has a simple syntax and execution, making it significantly easier to learn than many similar coding languages.

Games that were created with Python: Sims 4, World of Tanks

Read our comparison guide on Python vs. Java.

Read our guide on how to learn A-Z Python for FREE.

You might not be familiar with the Unreal engine, but UnrealScript or UScript is a language developed by it. UnrealScript is an object-oriented language, and its universality allows you to build games supported by Windows, Microsoft, Linux, Playstation, and other major gaming platforms. UnrealScript is a native scripting language, and though probably not very familiar to you, it has such advanced features as multiple inheritances and fueled games.

Games that were created with UnrealScript: America’s Army, Unreal Championship

Lua is one of the easy-to-learn and lightweight programming languages. It’s highly compatible with complex languages and allows building a broad scope of games. Lua allows embedding into different applications. So, if you create a game with Lua, the players can easily alter it later. It’s mainly supported by Corona SDK, CryEngine, and Gideros mobile.

Games that were created with Lua: Age of Conan, Aquaria

The language was introduced in 2000 by Microsoft, so it’s not surprising that the main application of C# created games is for Xbox and Windows. Generally, C# is one of the most popular options for video game development, mainly thanks to its XNA framework, a set of tools by Microsoft. Small studios widely use the language. For a newbie programmer, it’s easy to learn C# quickly.

HTML5 is becoming increasingly popular in the video game development industry. It is usually used with JavaScript, and one of the language’s competitive advantages is that it’s easy to learn. HTML5 does not require a knowledge of complex algorithms to build a game. Its syntax is simple and user-friendly. It’s also worth mentioning that HTML5 is mainly designed for web games development, and it’s used in many games we play today.

So, which of them is the best programming language for games?

The short answer is any of them. The above list contained the list of the most popular coding languages that most developers and companies use; therefore, learning any of them will give you a competitive advantage in the market.