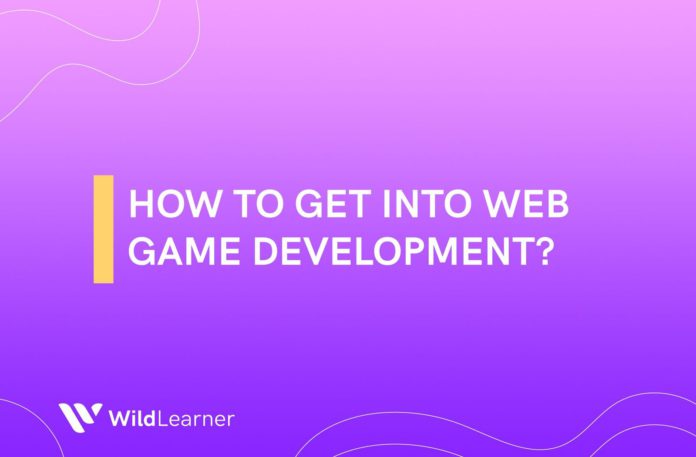 Ever wondered how to get into game development? This blog post has answers to all your questions. We’ll tell you what game development is, the benefits of becoming a developer, and whether it’s a worthy career choice.

We guess you wonder which programming languages are best for game development in the first place. In fact, there are many coding languages, such as C#, Java, JavaScript, etc., that you can use to create games.

If you’re interested in learning those coding languages or need some help getting started with your own game development business, this is the blog post for you! We’ll learn the ropes of this competitive sphere and hint you at the source of FREE video lessons for game development.

What does a career of a game developer look like?

We know you’re excited to start, but before that, let’s learn what game development is.

Game (or video) development involves creating interactive games for computers and gaming systems such as smartphones or consoles. This includes the design of both digital art assets and programming code. It may also include creating music, sound effects, and voiceover work.

The game development process can be divided into several main stages.

It is the stage where you create an outline of your game (story, characters, and other elements). The main goal is to gather a team of programmers and artists that will help bring your idea into reality.

Game writing is about writing code for various gameplay parts such as artificial intelligence, game physics, and graphics.

This stage refers to playing the game and making sure it’s bug-free. This is done by a group of people called Quality Assurance (QA). They look for any visual or audio defects in your game and gameplay issues that may throw off the player’s experience.

Expected duration: from a few weeks to several months

You need to deal with game publishing as a final stage. Here, you will offer your finished game for sale on various Steam or Google Play platforms.

Expected duration: from several days to multiple years (if you’re deciding to self-publish)

What are the requirements to become a video game developer?

The requirements vary from company to company and even from project to project. However, most game development companies require you to understand programming languages and math to get started. You should be creative and have a passion for video games. Last but not least, familiarity with common game engines and tools is a plus.

What languages are required to learn for a video game developer?

The main languages used in game development can be grouped into low-level and high-level languages.

The best choice for your first language is usually a high-level one, such as Python or Java. These languages are easier to learn and use than low-level ones.

Which language should a beginner choose for game development?

As we mentioned earlier, high-level languages are easier to get started with, and Python is one of them. Python is known for its readability and comprehensibility, making it a perfect tool for beginners.

Another thing to keep in mind is that Python runs on both Windows and Linux platforms, which means you can use it with almost any game engine out there.

We also recommend you learn Java as it has several benefits for game developers. Java is a popular programming language used to develop Android development applications, cloud computing, and much more.

It’s the most-used high-level computer programming language today. Java can be used to create both mobile games and browser or desktop games.

It allows creating complex and straightforward applications for smartphones, tablets, desktops, computers, or the web.

Check our complete list of programming languages for game developers.

The benefits of becoming a video game developer

The main benefit of becoming a game developer is that you get to do what you love. You’ll work on something exciting and challenging, which will give you the chance to build your own games from scratch or help other people bring their ideas into reality.

Another great thing about this career is that it allows you to work in various fields. You could be working for a game studio, a mobile app development company, or even on your own as an indie developer.

Your first steps into the video game development sphere

The best way to find a job as a game developer is by getting experience first. You should try to find game development communities and participate in related events.

You can also create some games on your own and show them off online for free or at local meetups. Try to build a portfolio of projects that showcase what you can create. Don’t be afraid to ask people if they need help with programming or game development.

If you lack experience, try looking for a job as an intern first, or find companies that are willing to hire beginners and work your way up from there.

The video gaming industry is intensively growing. With new platforms such as virtual reality (VR) and augmented reality (AR) coming into the market, game developers have a lot of potentials to make a good living.

So, are you ready to become a game developer? Follow our tips above, and you will be well on your way! If you’re looking for more information on game development or coding in general, be sure to check out our blog and FREE courses. Happy learning!