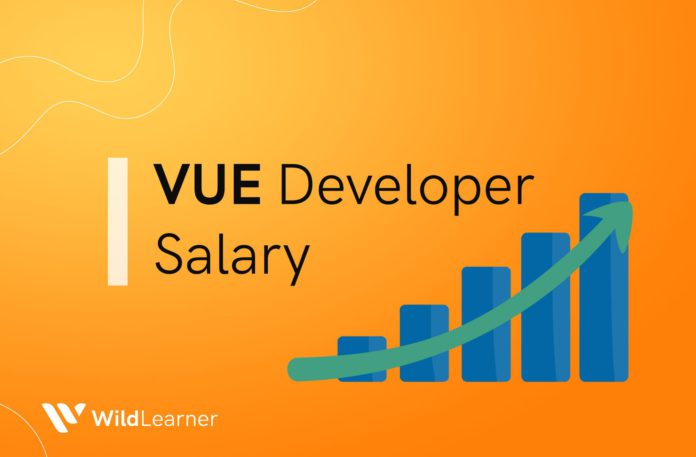 Vue is using a declarative approach to design and develop mobile and desktop applications and user interfaces. It derives from the JavaScript programming language and uses HTML for its further development.

The programming language operates based on components. It accepts components you insert as inputs and builds the user interface by analyzing these components and rendering descriptions from them.

Vue is a relatively younger user interface designer. It was developed in 2014 and is consistently compared with React JS and Angular JS, which are known to be Vue’s main competitors with their functionality and popularity. Regardless of the intense competition, Vue has managed to achieve a big success in the market by gaining high demand.

Why Is There A High Demand For Vue JS Developers?

Vue Developers enjoy high demand in the market because Vue has numerous features that make it stand out.

Firstly and most importantly, Vue is very lightweight. As it uses virtual DOM for operation, Vue serves as a solution to one of the most significant issues of developers – page reloads. Heavy software systems make the page reload a long and tiring process, while Vue loads pages momentarily due to its lightweight essence.

In addition to this, Vue is easy to launch and begin working with. Namely, as it uses a descriptive component-based approach, many web developers find it a straightforward programming language.

If you are a beginner and want to learn Vue through a fast and efficient course, you can create an account on WildLearner and complete a free Vue course with a certificate of completion.

Another advantage that makes Vue stand out is its SEO-friendliness, which is justified by its component-based mechanism. You can copy and paste components from your previous applications when designing a new application. This mechanism also guarantees the reusability of the system.

Although developed only in 2014, Vue has become a trustworthy system that companies like Google, Adobe, and Xiaomi use.

You may now wonder why developers often prefer Vue over the competitors. The answer is that Vue does not require deep background knowledge. All you need is a little understanding of HTML and CSS. You can master your skills in these two areas by signing up for free courses on WildLearner.

Based on the above-listed characteristics, Vue is a preferable option for many developers in designing user interfaces. Hence, as the demand for Vue goes up, so does the need for Vue Developers.

How Much Money Do Vue Developers Make?

If you are hesitating whether to master Vue or not or are simply curious about how much money Vue developers earn, we have prepared a brief overview of Vue developer salaries. The numbers are based on the data of the US market introduced by 4 of the most prestigious job posting websites.

Vue Developer Salaries According to ZipRecruiter

The latest research of ZipRecruiter demonstrates that the average annual salary for Vue developers is $121,919, equivalent to $59 per hour pay. The platform sets the salary range from $113,500 to $128,000, mentioning that there are developers who earn as high as $156,000 yearly.

Similar to the image of the top cities with the highest demand for React developers, Vue developers, too, enjoy high demand in the state of California. 7 out of 10 best-paying cities are located in California.

When observing the Vue-related jobs, you can notice that most of them are in the field of React JS. This illustrates the similarity and, to some extent, the interchangeable essence of the two languages.

Here is a glance at the average salaries earned by the five best-paying Vue-related job professionals.

Vue Developer Salaries According to Talent.com

Although Talent.com had estimated a relatively higher average annual salary for React developers compared to the other platforms, the picture is different for Vue Js.

According to Talent.com, the average annual salary for Vue developers is $116,054. This platform suggests an estimated salary range starting from $102,500 and ending with $136,500, the highest amount Vue developers earn.

Referring to locations, the three best-paying states are New York, California, and Washington.

Vue Developer Salary According to Glassdoor

Vue Developer Salary According to PayScale

Ultimately, PayScale shows the average salaries of all Vue skills professionals. Hence, the annual average wage of a front-end developer possessing Vue skills is $72,831. The salary range for this specialization fluctuates between $51,000 and $102,000.

Here are the salaries of some other specialists with Vue JS skills.

Vue is a lightweight programming language that uses a declarative component-based approach to create user interfaces. Despite having a short history and being developed in 2014, Vue has gained popularity and high market demand.

Companies with a high reputation like Google and Adobe are using Vue to design their user interfaces. Most businesses choose Vue due to its reusability and SEO-friendliness.

The accuracy of all the estimates related to the salary calculations depends on various factors out of which the most significant one is the location.

Wherever you are located and whatever your current occupation is, if you feel like learning Vue is something you want to pursue, WildLearner is where you should create your account, acquire the necessary skills, and obtain a certificate for free to give a start to your new journey!