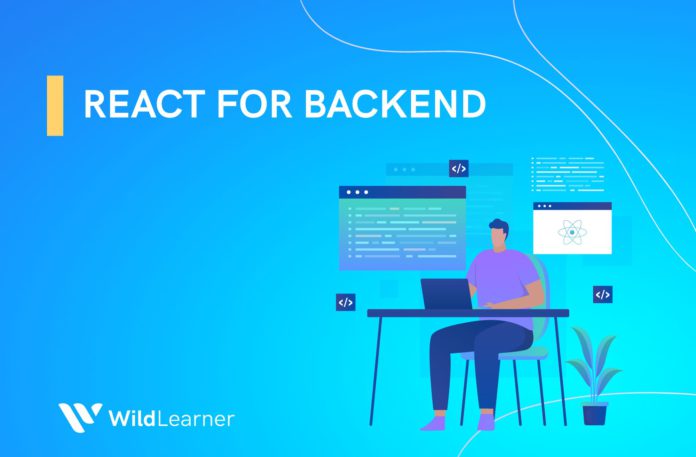 React JS is a popular front-end development library that helps developers create user interfaces and websites. Whatever is done on the front-end development, including the web page’s design, the visual content available on it, and other elements known as the client-side actions, are visible to the user. However, there are more complex processes to which the user does not have direct access. These processes, also called server-side or “behind-the-scenes” actions comprise the backend. Whatever it takes while coding or programming the necessary items for the operation of the web is a part of backend development.

What Is React JS? A Few Words

React is an open-source JavaScript library that allows the creation large user interfaces (UIs) using coding fragments referred to as components. It demonstrates a declarative programming style and uses its components to display whatever you have put in the description. React’s primary goal is to make the user interface design and usage for complex online apps easier as it operates through a virtual DOM, eliminating the need for a page reload when working with large-sized applications.

React’s reusability and SEO-friendliness are other enormous benefits. The component-based algorithm enables developers to use the same pieces of components multiple times in different web applications. As a result, developers save a huge amount of time and effort.

What Are The Best Backend Technologies to Combine with React JS?

As React is gaining popularity and becoming a highly preferred choice as a front-end development software, many web developers are trying to find the best back-end technology that would fit React.

Thus, we will cover a variety of technologies that developers often use in combination with React, including Node.JS, Ruby on Rails, and PHP.

Node.js is a back-end runtime environment that uses JavaScript and operates on the server-side. Because both React.js and Node.js are built on JavaScript, React.js code can be directly performed in the Node.js environment. Node.js enables developers to create scalable network applications. Node.js is an event-driven, non-blocking I/O model, which makes it lightweight and efficient for real-time applications. NodeJS supports iOS, Android, and Web.

In addition, it has a huge open-source community that is always ready to help, which makes it easier for developers to use.

Check out this free online Node.js course offered by WildLearner if you are interested in applying Node.js for your platform’s backend development.

Ruby on Rails is an open-source web application framework in the Ruby programming language. It helps developers create high-quality applications quickly as it comes with a wide range of features, including pre-written code, templates, and libraries. Also, Ruby on Rails has an MVC (Model View Controller) structure that makes the code more organized, which speeds up the development process. The main advantage of using Ruby on Rails is its wide range of gems (libraries) that can be easily integrated into the project and make web development faster.

To start exploring the Ruby programming language, sign up for this free WildLearner course!

PHP is a server-side scripting language designed for web development. As PHP is one of the oldest languages, it has a wide range of libraries and functions that make the development process quicker. It can be embedded into HTML code and easily integrated with various web frameworks and CMSs. In addition, PHP is compatible with almost all servers used today, making it a good choice for developers looking for compatibility.

WildLearner has got you covered for PHP, too! Get started with a free PHP course and master the language in just a couple of days!

Firebase is a mobile and web application development platform developed by Google. It provides a wide range of features that make the development process easier, such as user authentication, cloud storage, and a real-time database. In addition, Firebase is easy to set up and use, making it a good choice for developers looking for a quick solution.

Like the other backend development technologies we discuss, WildLearner offers a free course for Firebase, too! Check it out and sign up for it if you want to gain practical skills in this field.

Elixir is a functional, concurrent, general-purpose language that runs on the Erlang virtual machine. It is designed for building scalable and maintainable applications. Elixir has many features that make it a good choice for developers, such as support for concurrent processes, hot code swapping, and fault tolerance. It also stands out with its clear syntax and user-friendly interface.

The last backend development software we will introduce today is Django. It is a Python-based open-source web framework that stands out with features like an object-relational mapper, template engine, and form processor. Django also has a well-documented codebase that makes it easy to use.

React.js is a front-end development library that is becoming increasingly popular among web developers. While it is mostly used for front-end development, React can also be combined with various back-end technologies to create high-quality web applications quickly and easily. In this blog post, we have discussed the best backend technologies that can be used in combination with React.js, including Node.js, Ruby on Rails, PHP, and Firebase.

If you are interested in learning more about React or any of the other technologies mentioned in this blog post and want to master new areas of backend development, sign up for any of the free courses available on WildLearner and start your journey as a programmer!

Why Use React for Mobile App Development? Things to Learn

How to Learn React: Background Knowledge and WildLearner

What Job Is IT? Types of IT Jobs You Can Apply For Today