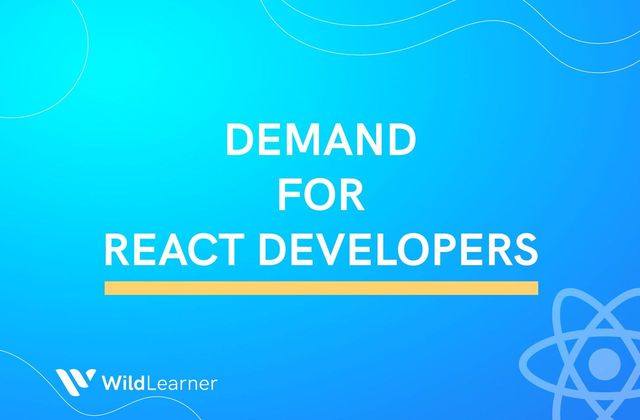 React JS is a JavaScript library that has been gaining immense popularity among web developers in recent years. This is because it offers a number of features that make the web development process faster and more efficient. This blog post will introduce why and how using React could help your business. We will then look at the market demand for React developers and dig deeper into what react developers do, what kind of knowledge they need to start working, and their average salary.

React is a declarative JavaScript toolkit that allows for creating complex user interfaces using components. The members of the Meta community created React JS as a modern replacement for DOM (Document Object Model). The lengthy loading time of DOM necessitated implementing a more rapid approach. To ensure a user-friendly experience, the Meta community created React, which has a virtual DOM that loads momentarily. Applying React proved to enhance the user experience by making page loadings quicker and lighter.

Why Is There A High Demand for React Developers?

As React keeps gaining popularity, so does the demand for React developers. Here are some critical characteristics of React JS that drive companies to choose it and make them look for React developers to implement this JavaScript framework successfully.

As introduced above, by using a virtual DOM, React makes page loading a fast and straightforward process. This, in turn, enhances the user experience as users do not have to wait long for pages to load. As a result, designing large user interfaces requires less effort by saving time.

React is a component-based framework. Therefore, developers can create modular pieces of code that can be reused multiple times. This makes the development process more efficient as developers do not have to start from scratch each time they work on a new project.

React can be server-side rendered, making it easy for search engine crawlers to index the content of web pages designed using React.  This is because when the crawlers access the web page, they can see the full content of the page right away instead of an empty shell.

React uses downward data binding, meaning that any changes made to child structures will not affect parent structures. This hierarchical relationship between different elements in the code allows for a more stable code. As a result, the need for constant maintenance and testing is reduced.

React is trusted and used by some of the most famous tech giants in the world, such as Facebook, Instagram, Airbnb, Netflix, and many more. As these companies trust React with their user interfaces, many other businesses refer to React as a reliable JavaScript framework.

What Do React Developers Do?

The job responsibilities of React developers can be divided into three main categories:

React developers use their knowledge of React JS and its features to write code for web applications. This code is responsible for the application’s functionality and ensuring it works correctly. Similar to the tests conducted by React developers to check the functionality of user interfaces, they also conduct tests on the code to ensure no errors.

React developers also provide support to users who have difficulty using the applications they have developed. They answer user questions, debug programs, and solve any problems that users are facing.

What Knowledge Do React Developers Need?

To perform their tasks, React developers need to have a strong understanding of the React library as well as other programming languages such as HTML, CSS, and JavaScript. In addition, they need to be able to work in a team environment and be able to communicate effectively with their teammates.

If you are interested in becoming a React developer and want to master your skills, you can check out the free online React course offered by WildLearner.

If you are starting from scratch, WildLearner has got you covered! You can start by learning HTML, JavaScript, and CSS and once you feel confident and skillful enough in these prerequisites, move on to exploring React.

What Is The Average Salary of React Developers?

The final point we will touch on today is the average salary of React developers. Now that you are familiar with the job responsibilities and the ongoing demand for this profession, you may want to explore the financial outlook of this job!

Different job-posting portals claim different numbers. ZipRecruiter estimates that React Developers make an average of $108,485 per year. This sum would equal $52.16 per hour, $2,086 per week, and $9,040 per month. The 25th percentile salary in the labor market is $84,000, while the 75th percentile salary is $132,000. These figures, along with other ZipRecruiter results, lead researchers to believe that the average pay for React engineers is highly variable. This is according to analysts because the field is still developing and has much room to expand.

React is a JavaScript library with many features that make the web development process faster and more efficient. The demand for React developers is growing as more businesses trust React with their user interfaces. React developers are responsible for developing user interfaces, writing code for web applications, and providing user support. To become a React developer, you need to have a strong understanding of React as well as other programming languages.

Lastly, if an average annual salary of $108,485 is what you are looking forward to, don’t lose time and get started with mastering React!