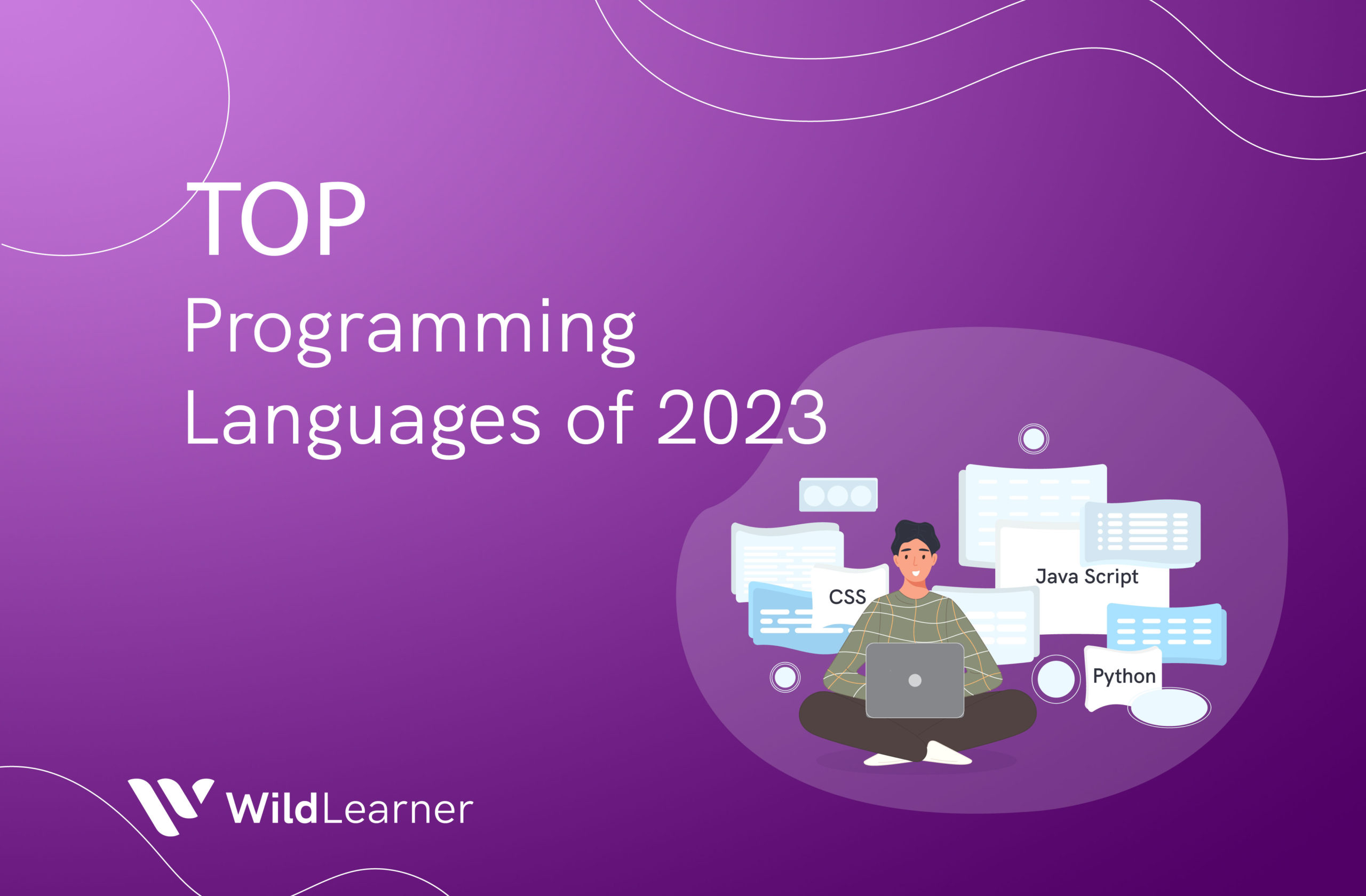 Staying ahead of the curve can be difficult in the ever-evolving world of coding. As technology continues to advance, top programming languages rapidly develop.

So, many jobs require a solid grasp of coding. With that in mind, learning the most demanded languages plays a crucial role in your hunt for a high-paying job.

This article reviews the top 5 programming languages you should learn if you have set about honing your skills as a developer or any job that requires coding skills.

Should you be interested in back-end web development, data science and app development, Python is undoubtedly one of the best languages to learn.

It was used by 15.7 million programming language communities worldwide this year, which places Python and JavaScript almost on the neighboring pedestals.

By way of example, as a general-purpose programming language (GPL), many powerful companies like Netflix, YouTube, Google Search, Intel, Facebook and iRobot machines have used Python to develop their websites. Besides, the user-friendly open-source Django framework is written in Python to develop Mozilla, Instagram, and Spotify. Still, this doesn’t mean it is solely popular with experienced coders; quite the contrary, its user-friendly structure, intuitive and clear syntax and versatility make it a perfect choice for beginners too.

Python Advantages and Key Use Cases

Overall, the following features offered by Python easily add its name to the list of top programming languages in demand.

In addition to its easy-to-use and -learn syntax, massive support libraries, flexibility and productivity, Python has an interactive quality that enables programmers to test code as they go. This frees them from having to create long sections of code before being able to test it.

However, Python is not without its drawbacks. For example, this high-level programming language is not really a good choice for intensive programs and mobile apps.

It is also reported to have a low execution speed.

Nevertheless, Python is one of the top programming languages in the market, if not the one and the average Python developer salary in the US for an entry position is  $89,050. As they get more experience, they can make up to $105,558.

Here are a number of skills required to become a Python Developer:

You are able to learn Python programming languages in Wildlearner entirely free, this platform  gives you a chance to free learning. Free certificates are available upon completion.

Javascript is widely used within the tech industry, with many major companies adopting it for their projects, like Facebook, Google, Microsoft and Amazon.

In terms of difficulty, JavaScript has a medium-level complexity. Although it can take some time to learn all aspects of the language, its syntax is relatively straightforward compared to other popular programming languages such as Java or C++.

Those with experience with HTML and CSS may find picking up on JavaScript concepts easier. By taking advantage of online tutorials or attending coding boot camps, newcomers can quickly become comfortable working with this language without too much effort.

Moreover, learning JavaScript for free is not a myth now! WildLearner offers its users perfectly developed and detailed free courses. Not only will this save you time and money, but it will also provide you with a free certificate upon completion. Knowing Javascript helps you easily find top coding careers.

One of them is its evergreen nature; this means that codes written in different versions of the language can be run on any modern browser with no modifications needed.

Moreover, JavaScript offers an array of frameworks and libraries for developers to use in their development process. These frameworks allow developers to quickly build functional applications in a short time frame. This time efficiency makes it attractive to many businesses looking for cost-effective solutions from their software development teams. Also, the large community of JavaScript users provides helpful support if any issues arise during the development process.

JavaScript is one of the top programming languages to learn, as it has many advantages. It is considered a versatile language, running both on the front-end and back-end. This means developers proficient with JavaScript can create entire web applications with minimal effort. Let’s take a look at some reasons why coders like to work with JavaScript.

Becoming a JavaScript specialist requires mastering quite a few skills.

As one of the relatively new languages in demand, Swift has been around for less than a decade and is used to develop iOS and macOS applications to run on iPhones, iPads, Apple watches and Apple TVs.

It is also essential for iOS audio design with diverse features like immersive audio, recording and processing audio in real-time or offline, creating audio effect plug-ins and more.

In 2015, Swift became available to everyone as an open-source programming language so today, developers of all skills can easily address their issues in a supportive community, learn from each other’s mistakes and access knowledge bases when writing code. Turning to 2021, the hoped-for support extension for Linux and Windows was introduced, which made a huge improvement in favor of coders.

Swift’s dynamic libraries and frameworks exist outside your code to decrease its size and load time and update without getting locked into code.

On the other hand, there are several things developers don’t like pretty much about it. Here are a number of honorable mentions.

Here are some major skills required to become a swift developer.

Swift is one of the top programming languages to learn and if you don’t actually know where to start, take a Free Swift course on Wildlearner.

HTML (Hypertext Markup Language) is another programming languages used to create websites, text elements, links and web applications. HTML is a markup language that allows developers to create webpages and format content with tags, Giving itstructure and meaning to the text. For instance, these may include elements like headings, paragraphs, images, videos, etc.

HTML can be used to create visually appealing websites quickly and efficiently. The language follows a set of standards that allows it to be compatible across all major browsers, including Chrome, Firefox, Safari and more.

Companies such as Microsoft, Google, Apple, and Amazon are just some of the large firms that use HTML in their development processes.

This programming language ensures that users are able to access your website regardless of their browser preference. Additionally, HTML provides support for multimedia elements like audio or video files as well as interactive elements such as forms or menus, making it an ideal choice for quickly creating modern responsive websites.

With its flexible building blocks and easy-to-use syntax structure, HTML remains one of the most used programming languages among both large companies and small businesses alike.

Despite its ease of use, HTML does present certain challenges for those who wish to take their coding skills further. For example, more advanced concepts such as creating interactive webpages or developing complex design templates, require an in-depth understanding of the language’s structure and capabilities. This means that mastering HTML requires dedication and patience from developers but is by no means impossible.

On the other hand, it also supports browser compatibility which allows developers to create pages that render correctly across different browsers without needing any special coding knowledge.

HTML consists of several features that make it an excellent choice for creating websites and web pages. Its tags can be used to define text headers, paragraphs, lists, links, images, audio files and video playback, in addition to other elements that enable interactive forms. Furthermore, HTML can be easily integrated with other coding languages such as JavaScript or CSS, which extend its functionality even further.

HTML coders annual salaries are between $58,120 to $73,098. This implies that you can find a high paying remote job and earn money at your home.

As a requirement, you need a text editor to write your HTML and CSS files. Also, you can use notepad on your device.

Now you see that HTML is one of the top programming languages to learn, in terms of growing your career. So, here’s a full learning course of HTML in Wildlearner for free to go beyond and sharpen your skills.

CSS, or Cascading Style Sheets, is a style sheet language used to define the look and feel of HTML documents. It’s commonly used to create responsive designs that are easy to maintain and scale up or down depending on the screen size or device used. CSS allows developers to separate content from the presentation so changes can be made quickly without having to rewrite code. Additionally, many modern frameworks such as Bootstrap use CSS for rapid prototyping, making it an essential tool for any web professional.

First and foremost, CSS is not a full-fledged programming language. It lacks features such as variables and functions, which limits its ability to create complex applications. As a result, developers have to rely on other languages such as JavaScript or HTML for complex projects.

A platform like WildLearner has everything for the beginner to learn the basics of CSS and become competitive specialists in the field. Take a Free CSS course to succeed in this new field and advance your career path. Moreover, the free completion certificate will become proof of knowledge and expertise.

The five most popular programming languages are Python, JavaScript, Swift, HTML and CSS – each with strengths and weaknesses that can be weighed against the requirements for different projects.

Choosing the right language for the job depends on the environment in which it will be used, as well as the programmer’s skill level.

You can decide to learn programming languages for different purposes like sound design, developing websites or apps and more. But if you don’t know where to start, use WildLearner to take free courses, get certificates and find your desired job.